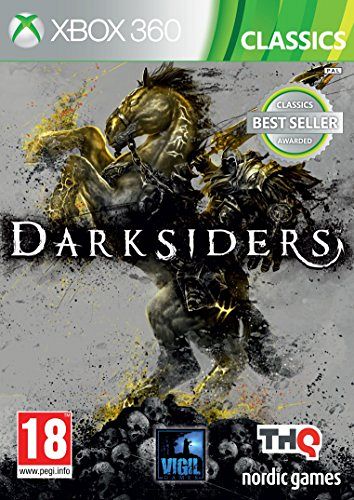 Deceived by the forces of evil into prematurely bringing about the end of the world, War - the first Horseman of the Apocalypse - stands accused of breaking the sacred law by inciting a war between Heaven and Hell. Dishonored and stripped of his powers, War must return to Earth to search for the truth and punish those responsible. Hunted by a vengeful group of Angels, War must take on the forces of Hell, forge uneasy alliances with the very demons he hunts, and journey across the ravaged remains of the Earth on his quest for vindication. But the answers he seeks will reveal a deep conspiracy in which War is just a pawn in the eternal battle between Heaven and Hell. Become War: Unleash the apocalyptic wrath of War with devastating supernatural abilities - an extreme arsenal of angelic, demonic, and earthly weapons - and use virtually anything within your environment as a weapon. Epic Quest: Journey across wastelands and demon-infested dungeons of the decimated Earth, and uncover the hidden secrets to aid in your quest for vengeance and redemption. Battle Heaven and Hell: Destroy all who stand in your way - from war-weary angelic forces to Hell's hideous demon hordes, and confront the nefarious Destroyer, the very harbinger of Armageddon. Choose Your Character's Progression: Uncover powerful ancient relics, upgrade your weapons, unlock spectacular new wrath abilities, and customise your gameplay style. Horseman of the Apocalypse: Gain the services of Ruin, War's fiery phantom steed, blazing a trail of destruction through enemies across devastated environments. Graphic Novel Art Style: Joe Madureira's (X-Men, Battle Chasers, The Ultimates) epic comic book-inspired visual art style and captivating original storyline.