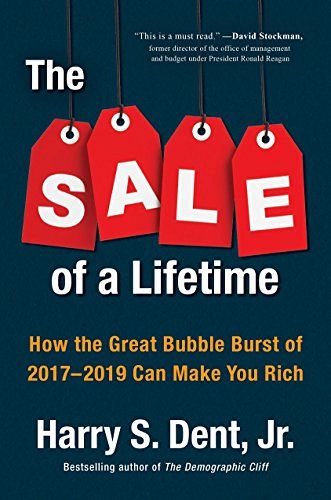 The Sale of a Lifetime

How the Great Bubble Burst of 2017-2019 Can Make You Rich After the Roaring '20s came the Great Depression. After the Roaring 2000s came the Great Recession. We're now entering the winter season of the 80-Year Four Season Economic Cycle. It's during this season that we'll clear the decks with a devastating crash and debilitating deflation. The economy and markets will shed the excesses created during the preceding fall bubble boom season and prepare the soil for new blossoming in innovation and a spring boom. After the blustering bull market of 2009-2015, we are now preparing for a shakeout more painful than anything we've seen before. We have eight years of unprecedented government stimulus and money creation to thank for stretching this bubble beyond imagination and making the burst more painful than anything we've ever experienced. There's no better guide to financial cycles than Harry S. Dent Jr. , the bestselling author of The Demographic Cliff and many other books, and the editor of the Boom & Bust newsletter. For more than 30 years he has earned a reputation for eerily accurate predictions about the world economy and the financial markets. Now Dent has an urgent new warning about the next crisis. The consequences will be devastating--but there's a bright side thjavascript:void(0);at he's calling the sale of a lifetime. For anyone who heeds the signs and follows Dent's advice, the looming correction is a once-in-a-century opportunity to gather immense wealth. In this pressing book, you'll learn not only why a collapse is imminent, but how to identify bubbles and tune in to the cycles driving that drive booms and busts. Practical, accessible, and illuminating, The Sale of a Lifetime will protect you from the tough challenges ahead and help you cash in on the unique opportunities of the next few years. At stake is nothing less than your entire financial future.

The Boy in a Turban

The Man With No Face